( OOC: I was here before, and I was here since the beginning, so I have items and bigger stats I just came back because I forgot the site )

Nuchiha, was in his home, high up in the mountains, out in the country, where civilization has left the land untouched. He exited his home, which was of normal size, but a bit larger. It had everything he needed, with a small underground structure which housed his Saiyan Pod. Nuchiha exited his house, feeling the crisp cool air, he climbed down to the meadow, it was nice, it was freezing, it was snowing. Nuchiha exerted his power, to the level of 200,000, hoping to attract attention...

Anyone going to join, or will admin make a random character?

It was a nice winter day, and Gokin was out on his deck, perched up in his rocking chair, getting nice and cosy under his blanket. While curled up in a ball, the young Saiyan boy's ears twitched as he felt a sudden power spike somewhere behind him. He bolted up, startled, but only realized it was just another powerful bad guy for him to beat the living hell out of. Stretching and yawning, he turned from his chair and walked forward, but he was still rubbing his eyes. And so he ran into a wooden pillar, and bumped his head. "Graaagh!" he yelled, as he fell backwards and stumbled about to stand up again. As he lifted himself and thought about how stupid he was, he turned around again, but this time entered the house. He looked to the left once entering, and said to the Chinese man next to him, "I gotta go, pops." "Okay, Gokin Son, go make big bucks for papa Ryu!" Gokin chuckled a little, once again, due to the old man's accent. He wasn't trying to be unfriendly, however. He's just too honest. The old man didn't notice, as he had redirected his attention to the crap-load of Zenni before him, on the register.

Gokin had quickly gone into the room he was renting, grabbed his Nyobo staff, his Gi, and his baseball cap, and left the room in a hurry. Flying, he felt, was one of the greatest wonders of the world. But he traveled on, flying in the direction of the sudden power spike. Along the way, he whistled compassionately to the passing birds and bugs, as usual. Eventually, he had met the area of which he had sensed the energy. When he arrived, he dissolved below into scenery, making a blotch of white and orange in the man before him's eyes. But, this man seemed similar... but it couldn't be! Or could it? He stood, marveling at the man, confused on how it could be. But, puzzled, he stopped squinting and just frowned at the man, crossed his arms, and asked nicely, "Gramps, is that you?" A smile began to grow across his face as he stared at the man, convincing himself ever more that the man in Saiyan armor was in fact his grandfather. His orange Gi swayed and wrinkled in the wind, from the warm summer breeze.

Gokin had flown hundreds of miles in minutes to see this man, and now he knows it payed off to be curious.

Nuchiha, saw Gokin, he knew Gokin since he was a kid, and became a ' grandfather ' figure to him. Nuchiha was delighted to see Gokin again after all this time. " How about a spar with your grandpa Gokin? " Nuchiha said enthusiastically, knowing Gokin was far more powerful, after all, he was of the newer generation.

"Wow, it is you!" Gokin exclaimed, ecstatically. He was literally now jumping for joy! He was so happy to see his long-lost Grandpa. "Gramps, what happened to you when that guy sent all of us into that other dimension? I thought everyone else was a goner! Oh, and sure, we can spar, I just need to catch up a little."

" Ok then, " Nuchiha said, as he went into a battle stance, it was cold, but not very cold. Nuchiha was a Saiyan, used to harsh environments... " Oh, yes, I remember, I have no idea what the heck happened, others survived, I think everyone survived, we'll just have to find them..... But let us get ready first... " Nuchiha said,

"Hehe..." Gokin lightly laughed at the abruptness of this fight, but went along with it anyhow. However, he just stood in place, puffed his chest forward, and awaited the punch. But suddenly, he turned Super Saiyan, and his aura changed to that of gold. His hair spiked and turned gold, and his eyes were now blue-green. He let Nuchiha punch Gokin, but it did nothing. It didn't even sink in his chest; it simply tickled! "Come on, Gramps, let's fight for real!" Gokin, now anxious for a good battle, pulled his arm up to chop his fist on Nuchiha's right side of his neck.

Nuchiha turned SSJ, and tried to hit harder, he sensed a strange power nearby, and appeared stateless....

Because Nuchiha didn't even try to dodge, Gokin hit Nuchiha strait in his neck, paralyzing him for a moment, as his body fell limp. His attack was negated, as he fell without function for a moment. "Uhhh... why didn't you block," Gokin asked, confused. After scratching his head from bamboozlement, he went into his fighting pose, but quickly lifted his leg high above his head, and attempted to bring it down upon Nuchiha.

Shargen exited the portal, he had absorbed Gandor, he travelled to thousands of dimensions in seconds and gained unimaginable power. He approached Nuchiha and Gokin, and had a boastful laugh " HAHAHAHA " Shargen said... " You are NOTHING " Shargen said, as he raised his PL to, 1,000,000?!?!

" Not now, Children, I shall host a tournament, if no one worthy participated, I will destroy all of Earth's inhabitants! " SHargen said

" Sorry, Gokin, I sensed something. Wait, It's Shargen!! How?? " Nuchiha said angrily

"WHAT THE?!?!?!?!" Gokin, after knocking out Nuchiha, was soon abruptly interrupted by some random guy. He looked over to see it was a green guy, named Shargen. Surprised he said, "What are you saying?!" He took his leg from above Nuchiha and placed it to his side. He clenched his fist in preparation, but also kept them to his side, along with his legs. He powered down from Super Saiyan, but was ever ready to go back into it.

" Hmph, your no match for me, remember before that wizard? What's his name? Oh, yes, his name was Gandor... Ehh, after you killed him, I absorbed him, his powers are limited, plus, they drain a lot of energy... But no matter, I am stronger than you can ever imagine! But, don't become discouraged... I shall hold a tournament, this shall determine the fate of Earth! The tournament, is today! Now! " Shargen said, he then flew off to the Cell Arena Mk. II...

Gokin, mortified at the new developement, had a new face of utter horror upon his face. Such fear of the distant future upon his face was uncomprehending in words. After staring at the android who soon flew away, he turned and went into a form of powering up, but instead yelled at the top of his lungs, "NUCHIHA, GET UP AND LET ME TEACH YOU HOW TO FUZE! IT'S OUR ONLY CHANCE, YOU LAZY BUM! GET UP, YOU MAGGOT!" Gokin was now so furious, his head seemed to grow 20 times its normal size, and his face was completely red.

" I know how to fuse Gokin, but even then, if we win, it'll be by luck probably... He's so powerful, and he's absorbed so many people, he absorbed Toxic, he can turn into Liquid, but still, we must try! " Nuchiha said, now worried about Earth.

"Ehhh... hehehe..." Gokin sighed, now realizing how stupid he sounded. His large head now transformed to that of a larger size, but blue with a big sweat-tear thing on the side of his head. He smacked the back of his head, in stupidity, and then stood normally, stopping the madness. "Then we should fuze when we arrive at the tournament. It's our only chance." Gokin paused, to let things process and to look down and think profusely, but continued; "And we won't have a problem. Together, our power will be over five-hundred and fifty thousand, plus we have our Super-Saiyan state."

Gokin, feeling stupid for not realizing this earlier, had slapped his face in disapproval of his idiocy, then said softly, "I can easily beat Shargen... My power level is multiplied by three when I'm a Super-Saiyan. I'm over a million when I'm super..."

" Yes, but remember that time when he powered up... He absorbed a Legendary Super Saiyan, his power grows, maybe fusing will work, hopefully... " Nuchiha said,

"I know fusion will work," Gokin cheerfully applauded. "So, we need to train together, catch up on some things. Take our sweet time."

Clara the Saiyan women, had just walked outside from Nuchiha's house. She closed her eyes and spread her arms, as she yawned from tire. She quickly said, "Honey, come back to bed..."

A ML helicopter landed, and a man came out, a man by the name of Cherdenko, who was the Brigadier General of the SR. " You, are the only man who hasn't seen the SR's might, I demand that you surrender your land to the SR so that it shall be used for a greater good. " Brigadier General Cherdenko said to Nuchiha. 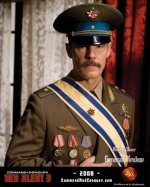 As soon as Clara had walked out the door, he heard her mutter the words, "Honey, come back to bed." Surprised, he took a step back and with a face of utter bamboozlement, he said, "Gran - Grandpa? You're married to Clara?" But, before Nuchiha had a chance to answer, suddenly Gokin heard the flutter of wings and the loud sound of jets and the such. As thousands upon thousands of men marched up onto Nuchiha's property, thousands of tanks came behind for support. Gokin, bewildered, watched as this man came up to him. After intently listening to what he had to say, he snapped. "Look, I don't know who you are and nor do I care. Now, if you know what's good for you, you'd best be on your way, fool!"

" Who exactly are you? " Nuchiha said