As he stepped out of his pod he looked around.This was supposed to be the location of where his father's ship touched down. As he didn't see the ship right away he started explore the local area further. As he didn't see the ship he decided to use the scouter. He turned it on and then after a minute, it picked something up.He then powered up and flew then he found the ship in a cave. He decided to go inside and check the ship for anybody. As he didn't find anybody he walked out then picked up an echo of a massive energy blast. He flew over to where the scouter picked up the energy echo and was shocked at what he saw. Turles jr clenched his fist as he looked on the devestation that laid before him. He had heard rumours of his fathers death but he did not believe them... until now. He had sought out the man who was supposed to be his father. The man who has abandoned him as a child. Who said he was weak and he was nothing. The man who's words made him want to be stronger. That man was dead. Though the man had insulted him and belittled him, he was still his father. Turles couldn't hold his anger in anymore and unleashed a ki blast so strong that it could be felt on the other side of the valley. Turles decided right then and there he would have he revenge on the people who did this.

Turles, I'm no admin or anything but I'm pretty sure that you need to use the template. 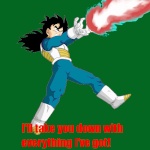 Yeah, you do. There is a template in the forum explaining how to create your character.